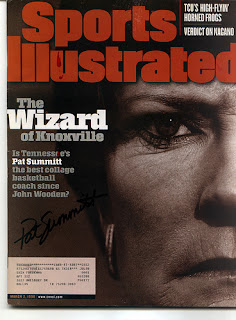 Signed by the greatest coach in women's college basketball history. Got it back soon after she won her 7th national title. This cover was from the mid-90s when the Sports Illustrated masthead was huge.
No comments: 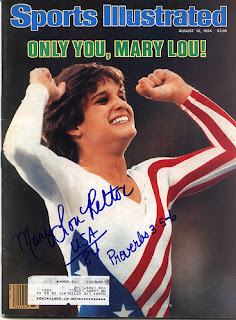 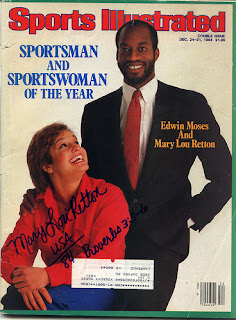 Two magazines signed by America's sweetheart of the 1984 Olympics.

Mary Lou's favorite bible verses come from Proverbs 3:5-6 - " Trust in the LORD with all your heart and lean not on your own understanding; in all your ways acknowledge him, and he will make your paths straight."
No comments: 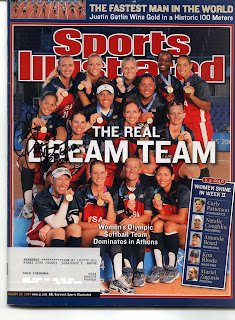 Arguably the best active softball pitcher in the world. 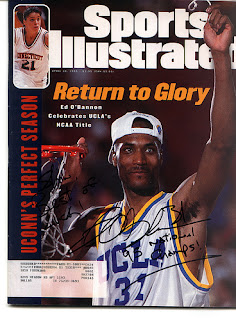 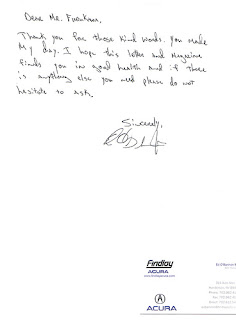 This was a pretty cool return from Ed O'Bannon. Sent it in care of the car dealership in Vegas where he now works. Came back in 5 days. He was nice enough to send a short note, along with his business card. I had heard him interviewed on the radio, and he was such a classy guy. No regrets about how his career turned out. Just very content with his current situation.
No comments: 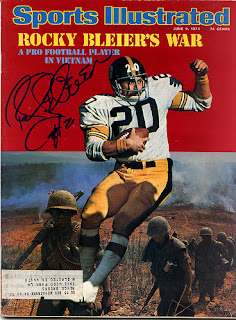 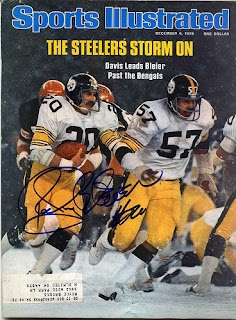 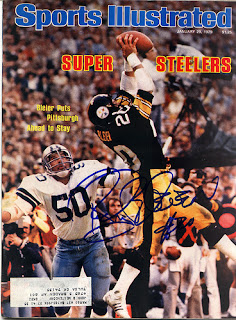 Got three magazines signed by Rocky Bleier within 6 days of sending them out. Rocky went to Vietnam in the middle of his NFL career and received the Purple Heart. He won 4 Super Bowls with the Steelers.
No comments: 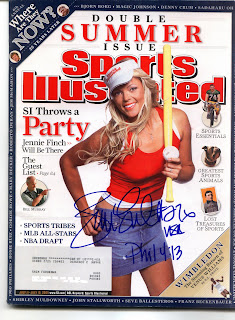 This was sent in care of Jenny's dad's company. He invented and manufacturers a softball pitching device.

Jenny's favorite bible verse is Phillipians 4:13 - "I can do everything through him who gives me strength." Supposedly she recites this verse constantly while pitching.
No comments: 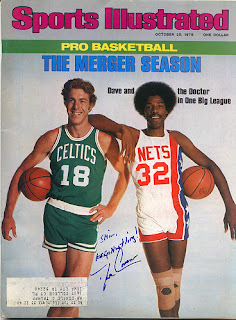 Another one of the NBA's Top 50 players of all-time, this one was sent in care of the Detroit Pistons.
No comments: 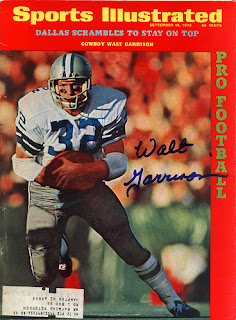 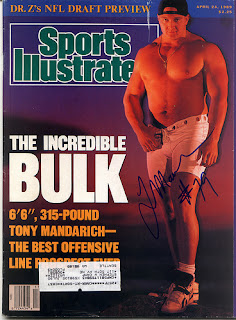 Coming out of Michigan State, this guy was considered one of the best offensive lineman ever. 300 pounders were a rarity back then, and no one had ever seen a guy 315 lbs who ran a 4.6 forty! He never developed in the pros, mainly due to unproven allegations of steroid use.
No comments: 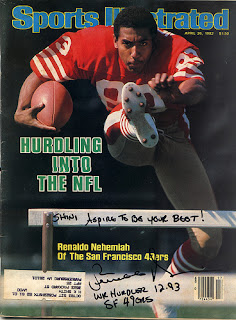 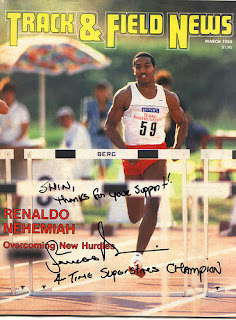 Another athlete who I thought was so cool when I was a kid. First off, he had the sweet name. Then, he was World Record holder in the 110M hurdles who decides to go play pro football at the peak of his track career. The guy would also dominate the Superstars TV show (and thus the inscription I requested!). He was also dating the older sister of a guy I knew back in junior high school. Never met him though. He's now an agent.
No comments: 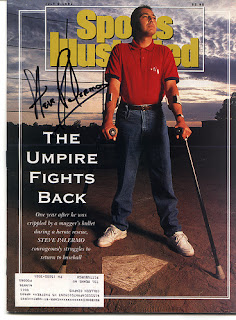 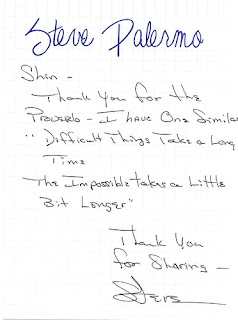 For those who don't know Steve Palermo's story, he was one of the best umpires in Major League Baseball. One night in Dallas, he was having dinner when he saw a lady get mugged, so he ran out of the restaurant chasing the thief. He was shot by the thief and paralyzed. Through rehab, he was eventually able to walk with assistance. A true hero. I send him this magazine, along with an inspirational quote, even though I'm sure he's heard most of them before. He wrote back with a short note and included a quote of his own.
No comments: 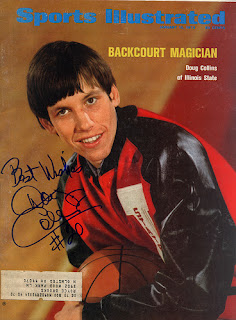 Most people know Doug Collins was a coach as well as a broadcaster. He also was a decent player back in his day.
No comments: 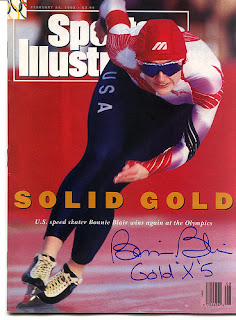 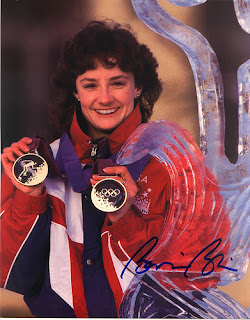 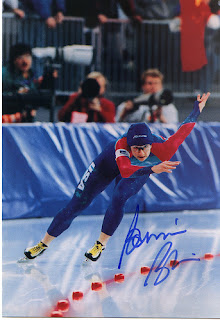 Bonnie Blair, 5x Olympic gold medal winner, included a couple of her own items when sending back my SI magazine. One is an 8"x 10" size photocard, and the other is a 4" x 6". Both were signed.
No comments: 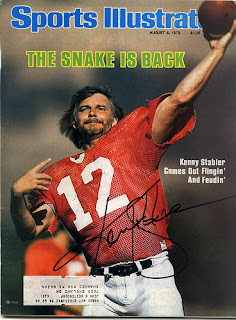 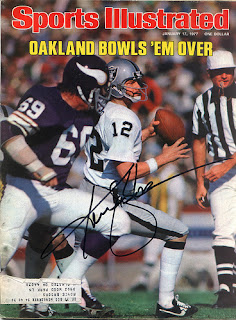 Two nice looking signatures from the "Snake". I heard he was having financial troubles so I included a $10 bill with my request.
No comments: 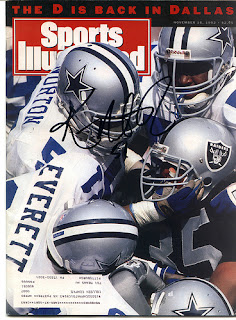 A very crowded cover. This one was sent to the USC Athletic Department where Norton is the linebackers coach.
No comments: 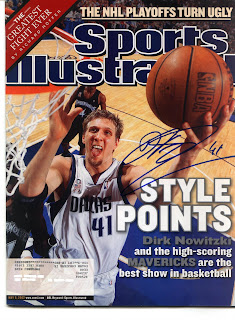 One of the few active NBA players who sign through the mail.
No comments: 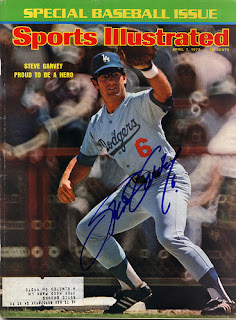 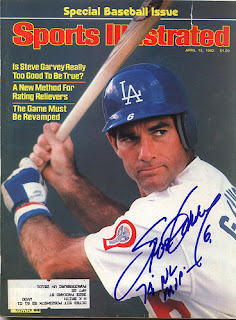 I got these two autographs in person, for free. Steve Garvey was signing at a grand opening ceremony at a sports park. The park was down the street from my church, so my friend Peter and I went down there after church. The line was pretty short (about 15 people in front of us), but Garv didn't show up for about an hour. Once he showed up, the line moved quick. There was a two piece limit, so I brought these two issues. Garvey took the time to shake everyone's hand. He was my first favorite baseball player growing up. He hadn't aged a day and looked like a total politician.
No comments: