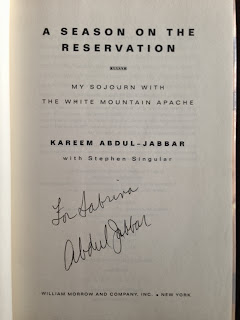 I picked up Kareem Abdul-Jabbar's book A Season on the Reservation at the used bookstore.  It was priced at a dollar but I had a 15% off coupon so it only cost me 85 cents!  Not bad considering signed copies of this book are selling for around $75 online.

I also picked up a couple of other signed books: Another signed copy of Roy Firestone's Up Close, and a book on the 1998 USA Women's Olympic Hockey Team called Crashing the Net.  Unfortunately it appears that signed copies of Up Close are fairly inexpensive online, so I doubt I can sell it.  As far as Crashing the Net, it is signed by the author, who I mistakenly thought was a player on the team but is not.  Shows you how much I know about women's hockey.
No comments: