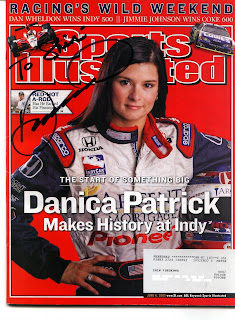 I'm not a huge racing fan, but it's cool that someone as popular as Danica signs through the mail.
No comments: 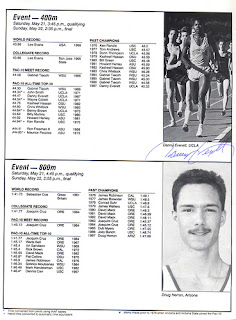 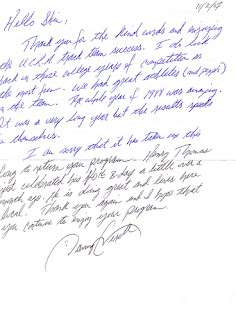 Track and field is my favorite sport. I've been a fan of Danny Everett since he was at Fairfax high school in the mid-80s. He then went on to become one of the stars of the 1988 UCLA track team that won the NCAA championship. Probably my favorite all-time squad. Danny Everett, Henry Thomas, Mike Marsh, Kevin Young, etc. That group was the first collegiate team to go under 3:00 in the 4x400 relay. I saw them win the Pac-10 Championship at Drake Stadium. I sent the program from that meet to Danny for his signature. He signed it in two places, including the one shown here. He also sent me a long letter responding to my questions and comments. Since track and field isn't a big sport in the US, he probably doesn't receive a whole lot of autograph requests through the mail (mine was the first request logged on sportscollectors.net). Danny went on to win a gold and bronze medals at the 1988 Seoul Olympics. He is now working at a local high school where I sent my request. This is my all-time favorite return through the mail. By the way, the happy face he added with his signature on the letter is the second happy face I've received (Rick Barry had one too).
1 comment: 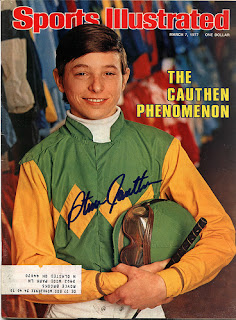 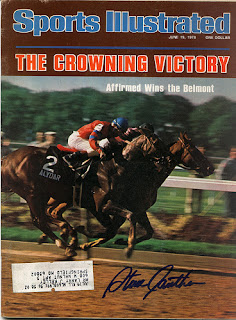 Steve Cauthen appeared on the cover of Sports Illustrated three times over a period of less than two years. Imagine a jockey appearing on the cover of SI today. These are two of his covers.
No comments: 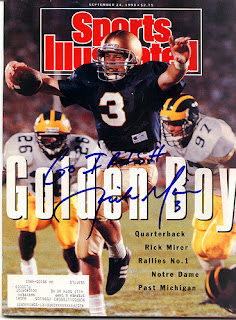 Another Notre Dame quarterback's autograph. Rick signed this through the Notre Dame Alumni Association.
No comments: 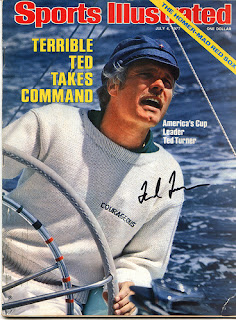 Probably the richest person who has autographed a magazine for me.
No comments: