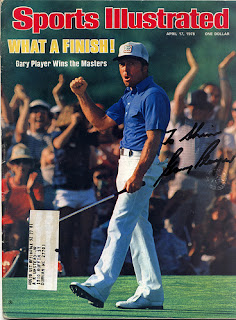 This one took 231 days to get returned. It was sent in care of his corporation. It came back with a letter stating that Gary Player only signs one item per person. Under his signature, he provided his own seal imprint. You can see it under his last name. Writing to him apparently places you on the mailing list of his Player magazine, because I ended up getting an issue of it later.