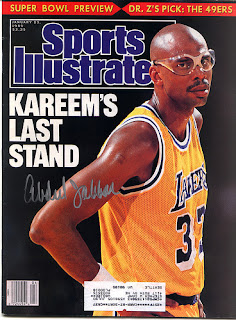 It always looks cool when a silver Sharpie is used against a dark background. Kareem has such a clean signature which shows nicely here. He rarely signs his first name. Even rarer are autographs which he has signed 'Lew Alcindor'. This one was sent in care of the Lakers. I later found out he has a one autograph per person policy. If I had known that, I probably would have sent one of my other issues where he is in an action pose. But this one is a nice portrait nonethless, and it's pretty sweet to get a free autograph return from arguably one of the NBA's top 5 players of all-time. Kareem used to have a pretty frosty relationship with the press and his fans, but I recently read that after his house burned down in the 1980s, he was touched by how many people from the publc gave him records to replace his famous collection which was destroyed in the fire. He says that this showed him that people truly cared.